In our short, overnight stay at Muskallonge Lake, Ken and I met some great folks. We met some road angels that stopped to talk. They know what a trail angel can do to raise spirits, because he hiked the Appalachian Trail and was blessed with the special deeds these angels can deliver. We never did get their names or pictures, but they gave us beer that evening and that really helped lift our spirits after our day in the desert.

The next morning, just before we left, we met Kevin and Cynthia. We talked bikes, running, diets, and Christ. Cynthia, especially, has leaned heavily on her faith. She had a congenital hip problem that was not discovered until she was in her 50s. Both hip sockets/joints had been giving her so much pain. The doctors kept telling her it was arthritis, because she had never had the pain until she got older. She fasted, and prayed, and found a doctor that properly diagnosed the issue. She had surgery to fix it, and has been pain free ever since. It is hard to imagine going through life without the love of Jesus. Having Him as your rock, your confidante…having Him living within you feeling your pain, and understanding the anguish, makes it possible to hold on to hope. Kevin and Cynthia prayed for us before we left. We felt that umbrella of love and were ready to embrace whatever the day had to bring.

And, the day was grand. Warm, sunny, and paved! The time and miles were syncing today. It felt like no time, before we reached our goal for the day. We had nowhere planned to stay, so we were winging it. We came to the intersection of our turn, and about a quarter mile down the road we spied Kritter’s Campground. We rode into the park and Larry, the owner, said he had a site open. He also said, even if he didn’t have a spot, he would make one for us. Larry, his wife, and daughter, call Kritter’s their home. It is a beautiful park, small and cozy, clean, and homey. His wife has a gift for gardening, so flowers abound in the front yard, where the hummingbirds play.  Both, Larry and his wife, were so very good to us with many small gestures that meant so much!  We can’t thank them enough!

We had ourselves a fire and marshmallows, then headed to bed. That evening I was awakened by the sound of, what I am sure was, a wolf. It was 3:30am and both Ken and I, heard the howling. I know a coyote yelp, and this was much deeper and eerie. I also remember the howling of the wolves at DeYoung Zoo, and it was the same. Larry said they do get the occasional wolf and was not surprised I heard it.

We woke up to rain, cold, and thunder…maybe that is why the wolf was howling! It started to pour. We checked with Larry to see if we could stay another night. We had to move, but we were dry for the day. Actually, he put us right next to an enclosed pavilion where we were able to store our bags, and I was able to catch up on the blog.

During this time we met some super people. Ed came in the same night we did on his shiny Gold Wing, pulling a camper. In the morning, he drove to town and brought us back bagels. Then went out later and brought us back much needed coffee, honey, and pizza. We went to his place and ate the pizza, and I cuddled up to his little space heater to get warm. Ed is newly retired from his job as a firefighter. His love is for his daughters, and traveling. He lost a son to drugs, and so he treasures the joy that his grown daughters give him. He shared stories of some of his adventures and life at work. Ken enjoyed his company today, especially, while I worked on the blog. We were unprepared for rain and really couldn’t have done the day without Ed!!

I met these youngsters in the park.  They rode their bikes all day long.  I don’t know why, but they just liked talking to me.  Probably, because I loved talking with them!  You never know if a short conversation with a young person, could change their lives for the better.  At the time, they didn’t know I was traveling on a bicycle.  Once they found out, they wanted me to ride the park with them, so I did.  What a blast!!

We also met Lorraine and Tom. Lorraine is a runner and cyclist. She has toured before, too. Both love to travel and these two had some amazing stories to share. Listening to them made us want to travel the world! But, our own country, this northern portion of Michigan, is perfect for now. 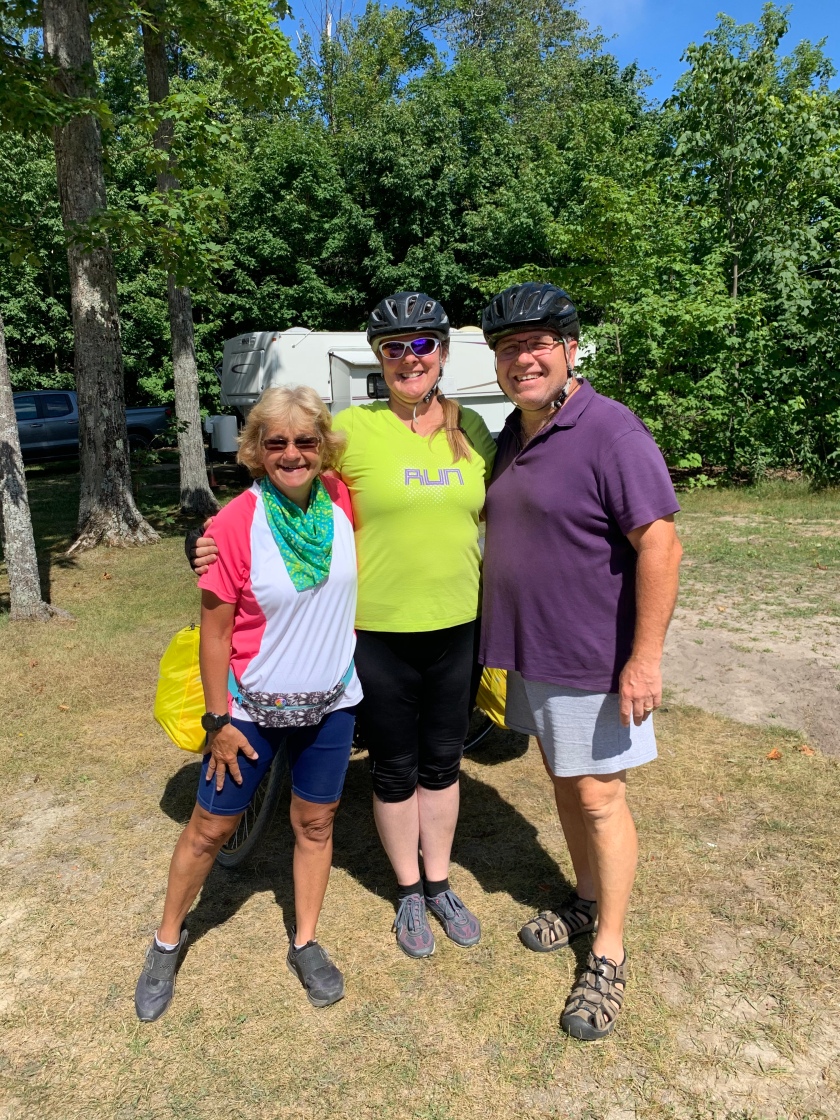 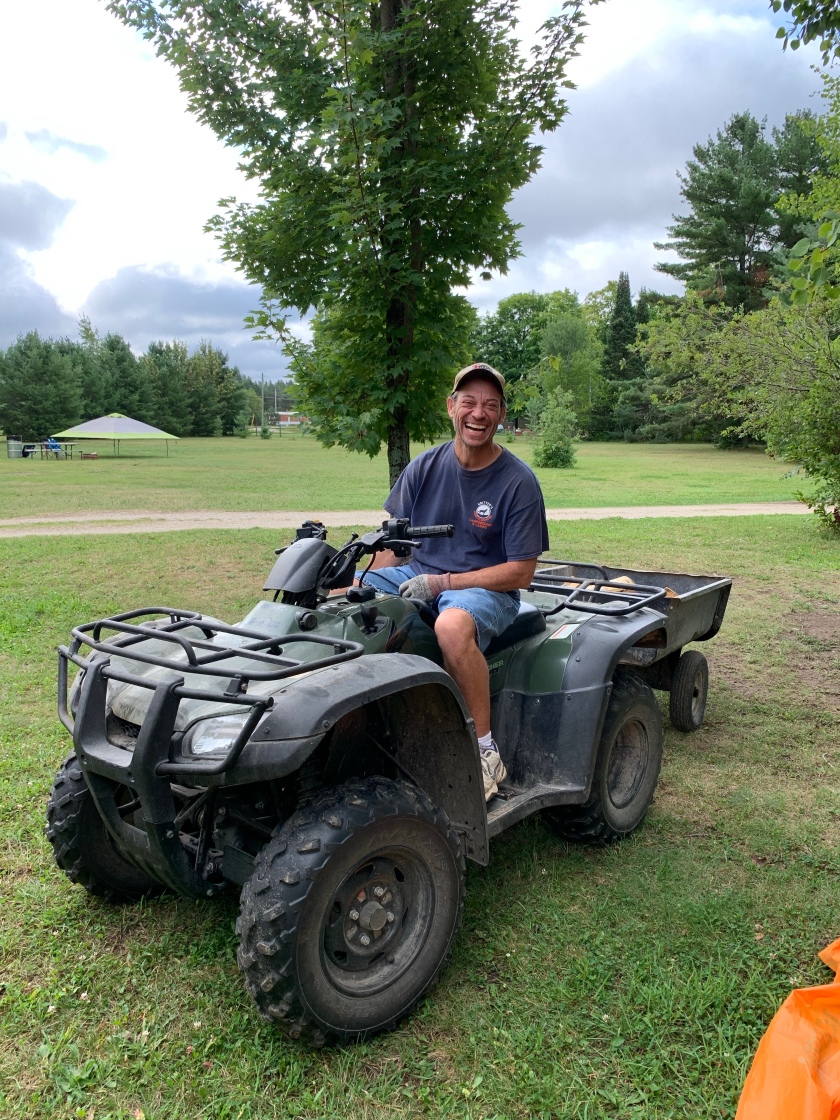 Larry!  He Had The Greatest Smile!! 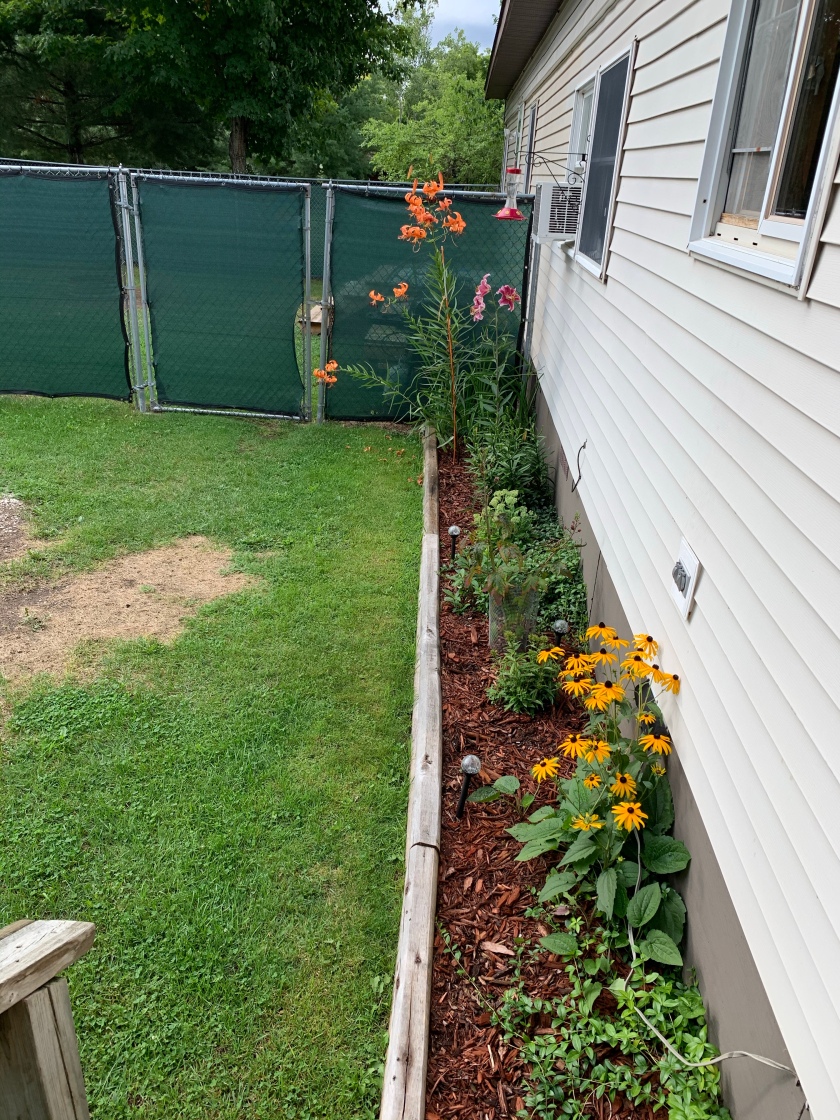 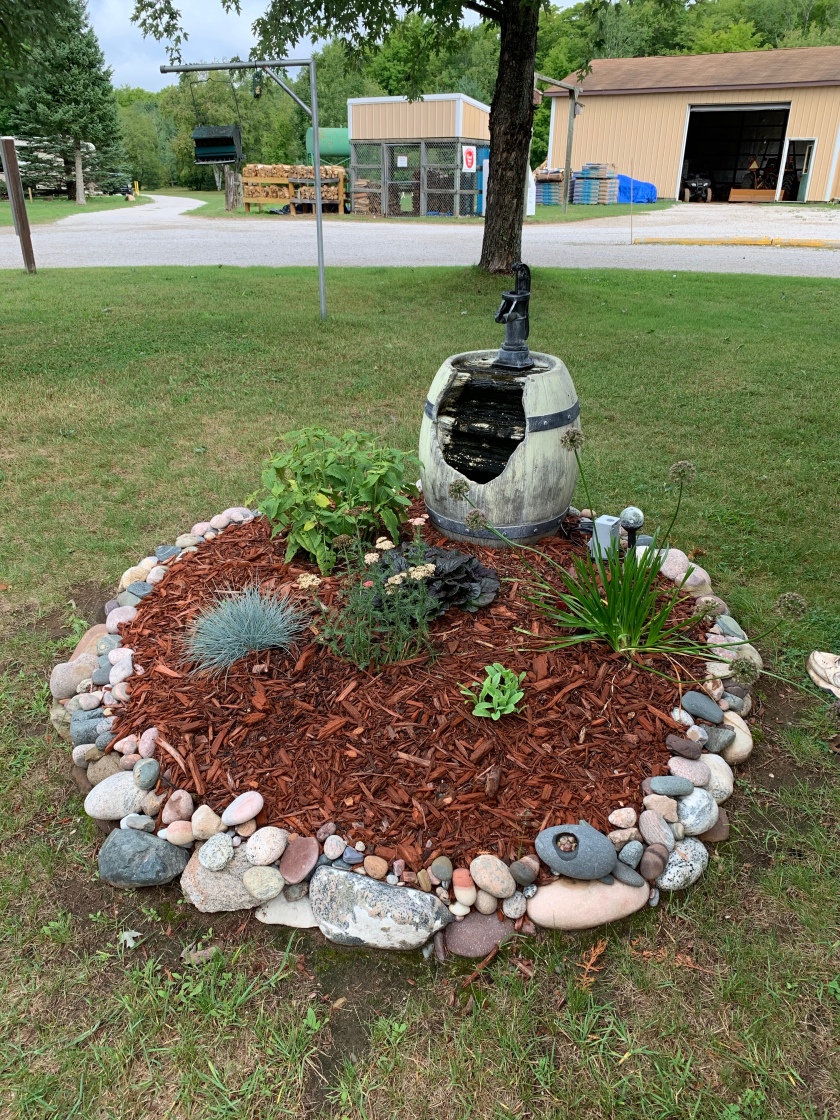 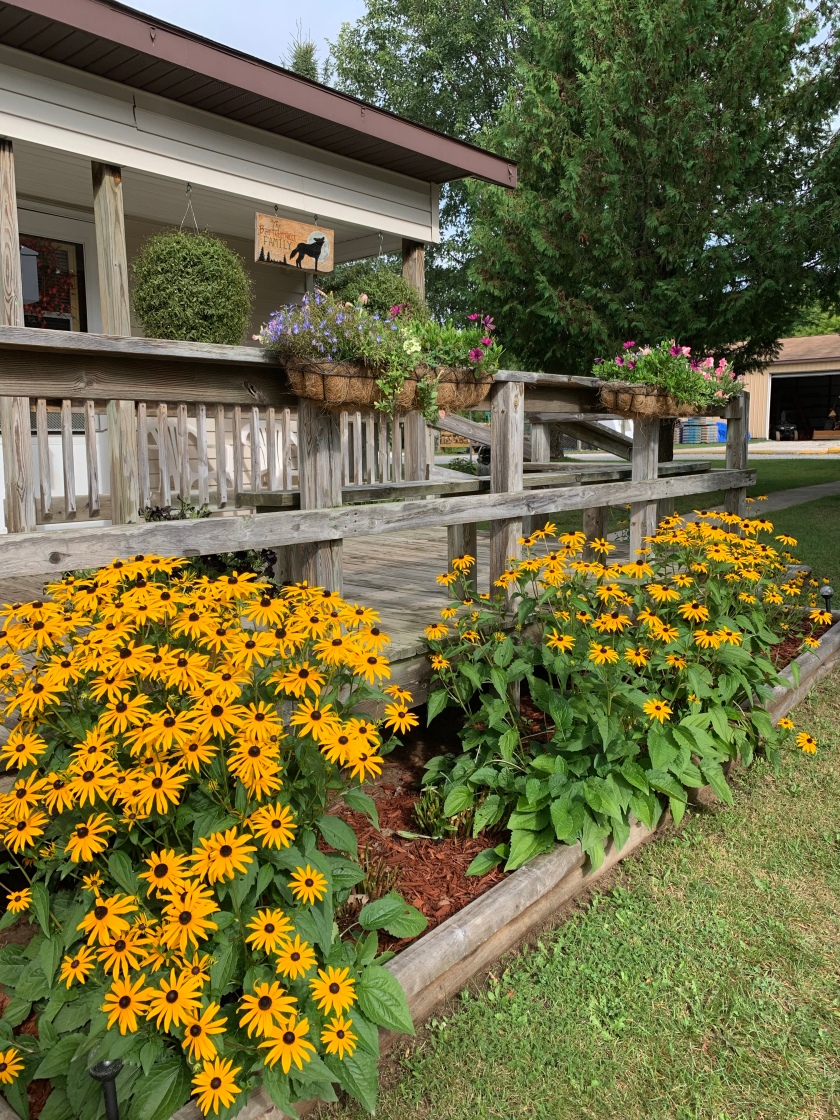 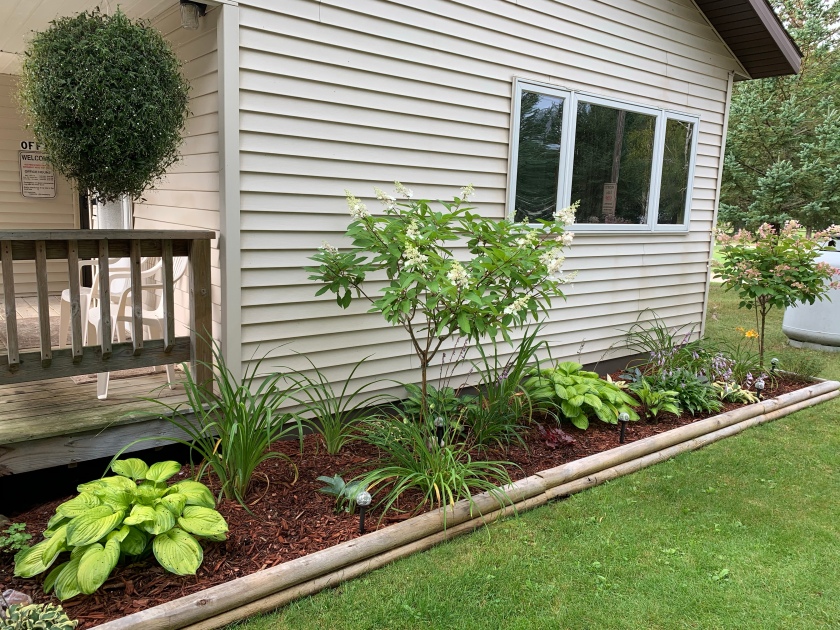 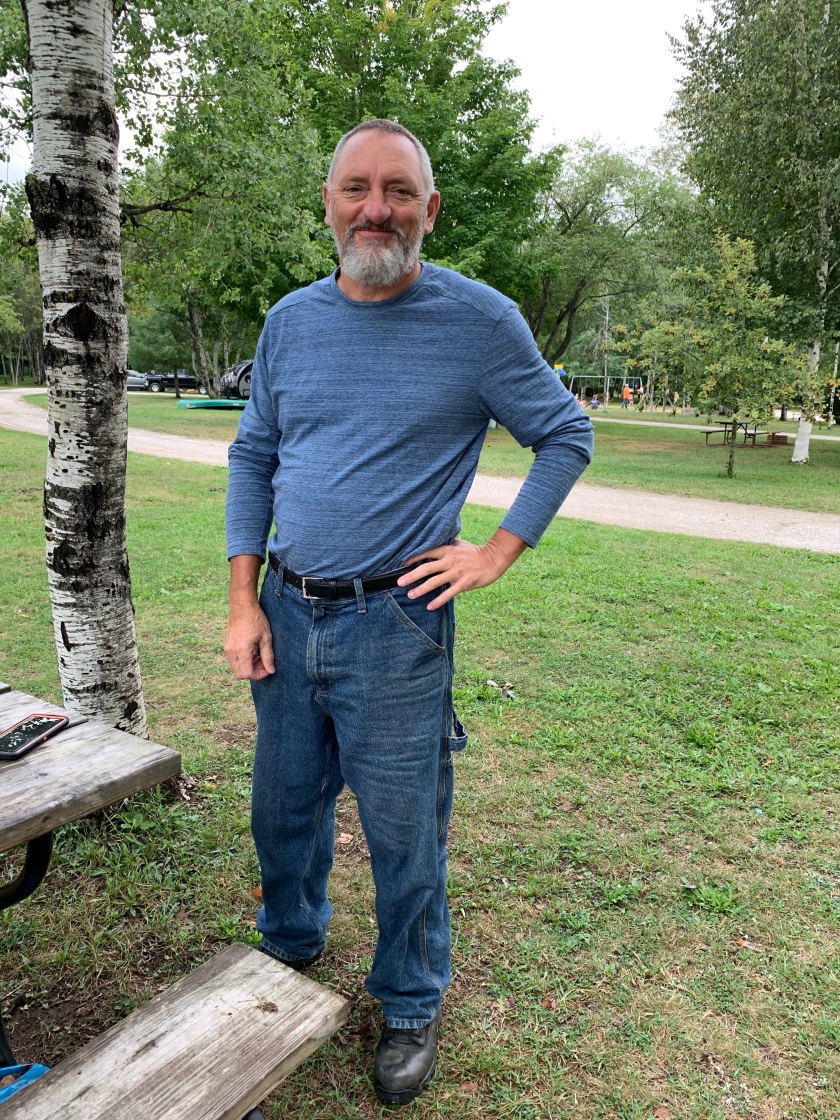 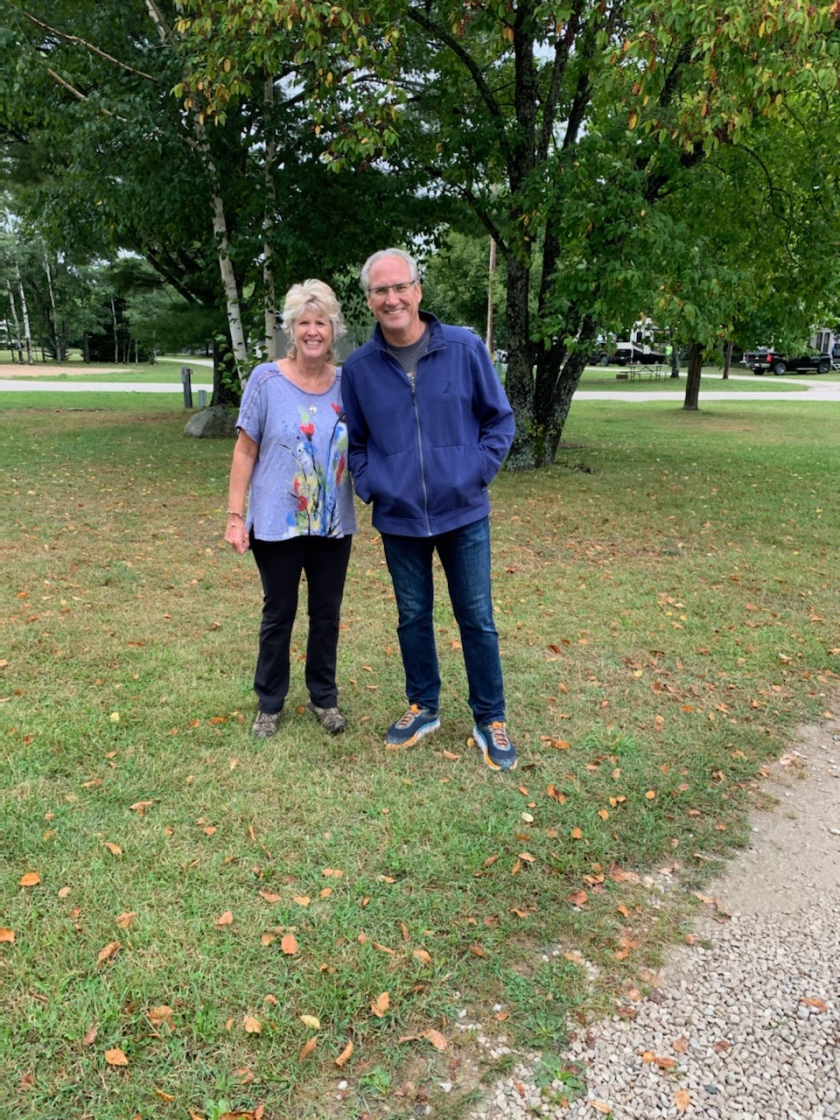 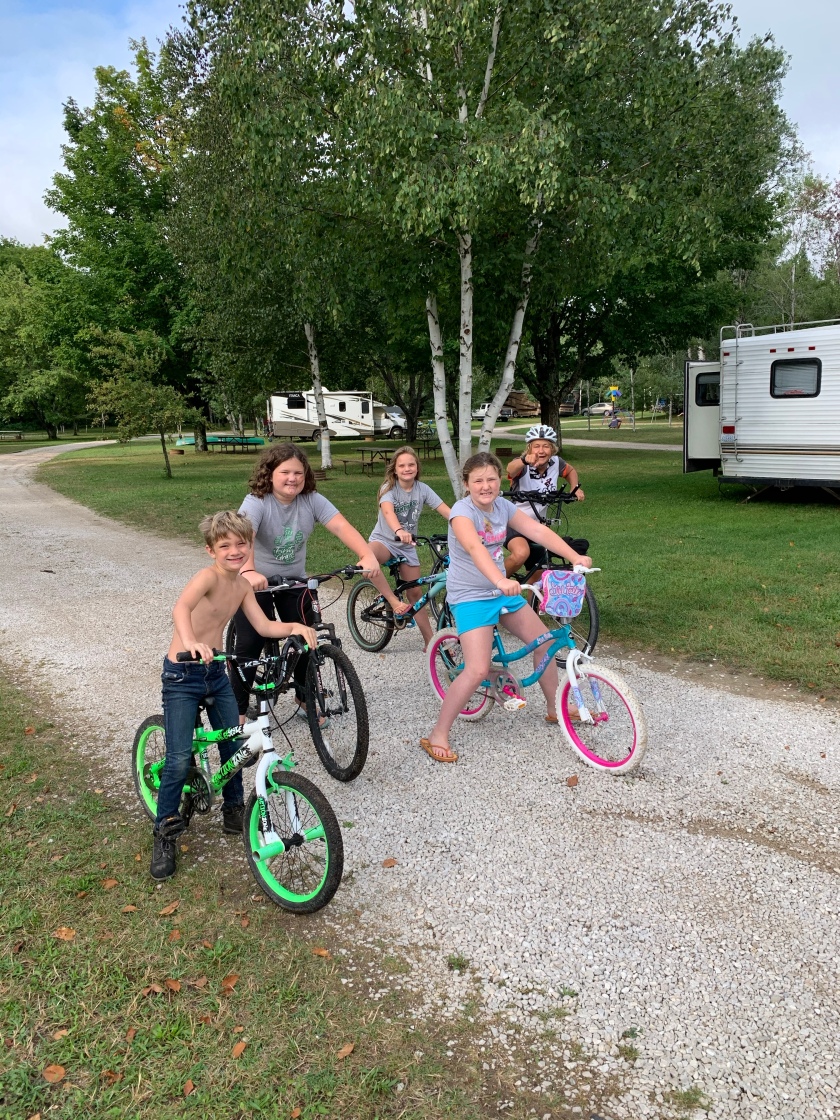 So Much Fun Riding The Park With These Future Cyclists!

I told the kids they need to wear helmets!!  I related the story of how I had fallen a few weeks ago, while just standing over my bike.  My head hit the pavement and I had a huge knot on my head for weeks!!…And I had my helmet on!  Thank goodness, if I had not had the helmet on, it most certainly would have been a bad situation.  I sure hope they will take my word of advice and get some helmets.  To my own dismay, I was having so much fun, and I was so busy packing, I never thought about talking to their parents about the helmets until I had already left the park.