We left Iron Mountain on our way to Florence WI.  The route we are following skirted the border of Wisconsin and Michigan.  What fun it was to meet a cyclist on the road while he was out for a daily ride.  We talked a bit while we rode and then he flew off ahead of us.  We made 2 stops looking for campstove fuel.  The type of cannister we have is going to be tough to find up here.  Most of what they carry are the Coleman cannisters with a large male thread…ours is a smaller thread.  We continued on, hoping to find one further up the road.  If not, we will have to replace our stove with one that fits the larger connection.

As we rounded a corner, there was our cyclist friend again.  It is amazing the conversation you can carry on while riding a bicycle.  He asked us all about our plans.  We told him he should ride with us!  He said he did go out once with 2 small packs and it did not agree with him!  He moved to the UP 30 years ago.  He grew up in New York, but had been living in Los Angeles with his wife (she grew up in LA).  They expected only a 2 year stint, but they are still here.  Imagine growing up and living in 2 of the largest cities on earth and then moving to Iron Mountain MI.  The silence must have been deafening!  You have to learn to slow your mind, slow your body, and just go with the slow flow of living.  It is more difficult than you think!  I remember moving to Hampstead, NC and going out of my mind!  The checkout clerks would gab with their customer, who probably lived down the street.  I would look around in disbelief but no one, other than myself, seemed to care.  You just waited until they were done with all of their catching up.   Car repairs took a week, because they had other things they needed to do…like go to the beach.  Not to mention having only 1 way to get somewhere.  I remember thinking, don’t these people have things to do, places to go!?  It took me several years to appreciate that slow life and now, I wouldn’t give it up.  Apparently, our cyclist friend and his wife feel exactly the same way.  We talked and rode, then said goodbye.

Speaking of the slow life, we had to leave him because our route was leading us to the fast life, up on Hwy. 2.  There is much more traffic on the highway.  The cars whiz by causing a rush of air to pummel us around.  The good thing was the shoulder in Michigan was really wide; as long as the drivers keep their eyes on the road, we would be okay!  We rode on the highway a bit before we were routed onto an old railway bed.  At first we thought this is great, we won’t need to be on the highway with all that traffic.  Short-lived!  First, the terrain was not hardpack, but loose, deep gravel.  Our tires were being shifted this way and that way and we could not maintain a straight course.  We struggled, actually, just to stay upright.  Then, all the UTV’s (Utility Terrain Vehicle) and ROV’s (Recreational Off-Highway Vehicle) came streaming by!  I lost count of how many were flying down this railway trail.  They all wore helmets, ear muffs, and goggles.  They waved as they drove by kicking dust in our faces.  It was like we were in the middle of a Mad Max movie.  By the time we were alone again, we looked like we just came crawiling out of a dirt hole.  Our teeth were full of grit, our skin was layered with dirt, and our eyes were nothing but hallow rounds causing us to see double.  It was another one of those times…we just looked at each other and shook our heads.

We were stuck on this trail for about 3 miles.  I almost cried, but didn’t.  I did do a lot of groaning, though.  And guess what?  Ken did too!  We even saw another biker out for a leisurely ride on this route…what!??  Now that is crazy!  Who in their right mind would ride this for fun?  Finally, we were routed back onto highway 2…but, this time we were in Wisconsin.  Now, I know I hyped up the biking in Wisconsin in my earlier posts, but for some reason, Wisconsin shrinks the shoulder on Hwy. 2 compared to Michigan.  With our packs, the bikes barely fit in the space provided.  I was terrified.  I kid you not!  I white-knuckled it, not chancing to take my eyes off the path for one second.  You could hear the trucks coming up from behind you.  Huge logging trucks laden with full-sized downed trees zooming by us.  Uhmmmmmmm…..

We eventually rode into Florence.  We stocked up on food and looked again for a fuel cannister without luck.  Just another mile to the campground.  The campground was called Camping In The Clouds.  Why do you think that is?  In hindsight, I should have thought better about choosing this site.  We are hill riding every single day, as it is.  We don’t really need to camp in the clouds.  It’s not on the bucket list, I swear.  But, it should be!  We came to the turnoff and the road was the same terrain as the railroad trail…only 10X steeper.  We just got off the bikes and bulldozed them up the road.  The office was located in the restaurant bar.  Do I need to say more?

I don’t know.  We have just been meeting the nicest people in restaurant/bars.  We sat down obviously exhausted and somewhat frazzled.  First order of business, a beer.  I know we sound like lushes and we do appreciate good beer, but we typically only drink 1 or 2 and we never just go to bars to drink.  1-2 beers is about all our bodies can take, anyway.  But, out here on the road, we still stick to 1 or 2, just more often.  There are people in the bars, we are always drained of energy, and a beer is so inviting.  But, the people!!  It is so enjoyable to belly up to the bar and start a conversation.  The stories, the accomplishments, the failures…they are all shared here.  You find out a lot about people who are sitting at the bar.  I like that!  The owners of Camping In The Clouds were wonderful.  They made us a great pizza with fresh vegetables, even fresh mushrooms, and no cheese.  They made up two salads especially for us.  It was all delicious.  They told their story of how they came to owning the campground after only being married for 8 months…the things we do to make our spouses happy!  We talked with the other people there and just enjoyed ourselves tremendously.  The showers were clean and private.  They even had an indoor pool.  Our site was even higher up on a hill, with electricity and water, which is sometimes a luxury for us.  We also found out that UTV-ing is a big thing here.  I would say the majority of people were there for that one purpose.  Most of them use the same trail we rode our bikes down…good to know.

We set up camp and prepared for bed.  John, our friend from the bar, who used to be a private eye, but now does advertising photography, offered to take our water and freeze it, then drop it off in the morning.  It was a long, hard day, but they always end so beautifully.  We woke to find the water already delivered!  I wish we could have spent another day camping in the clouds, but we really needed to move on to Iron River, where we had another ‘warmshowers’ awaiting our arrival. 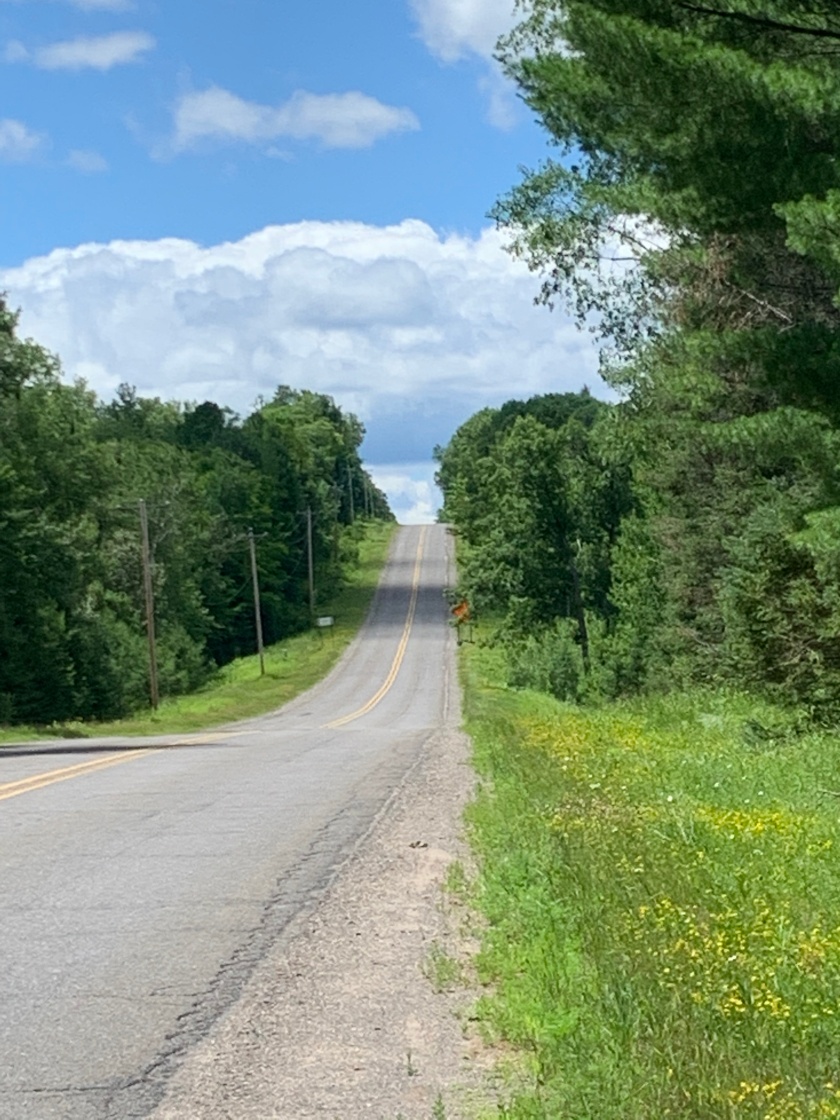 The Two Beauties and Their Barn…and Me 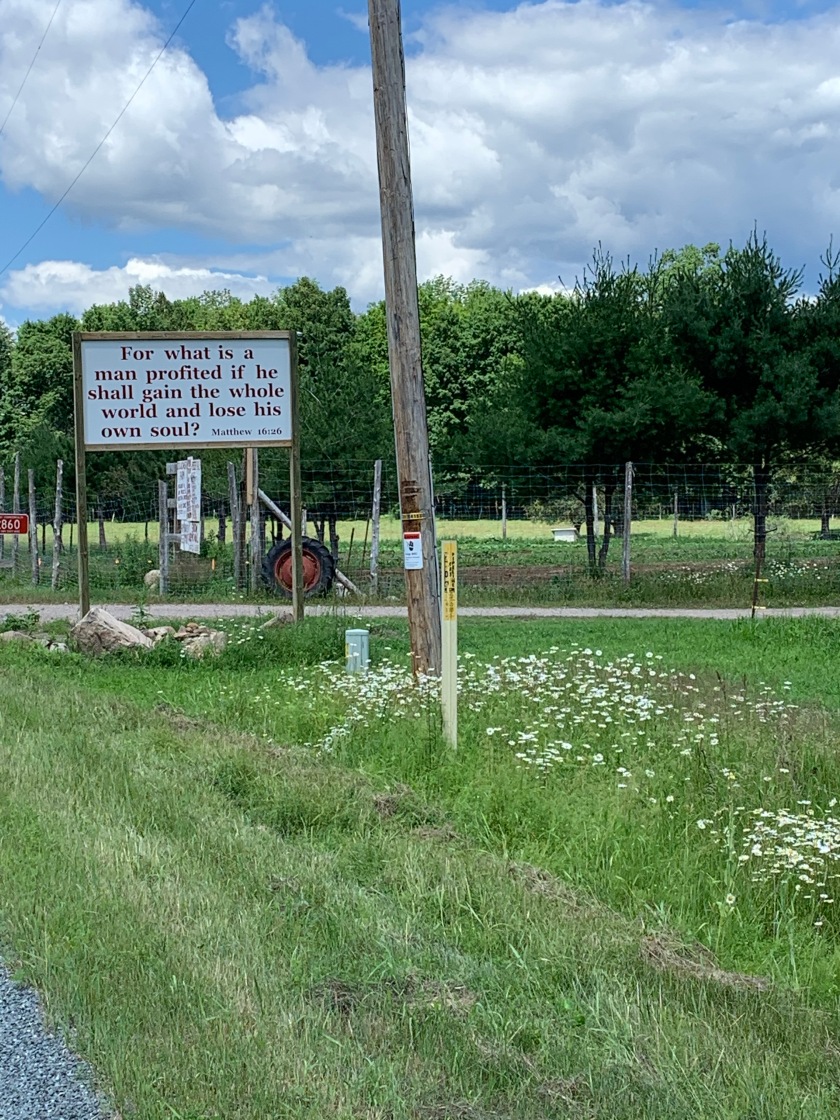 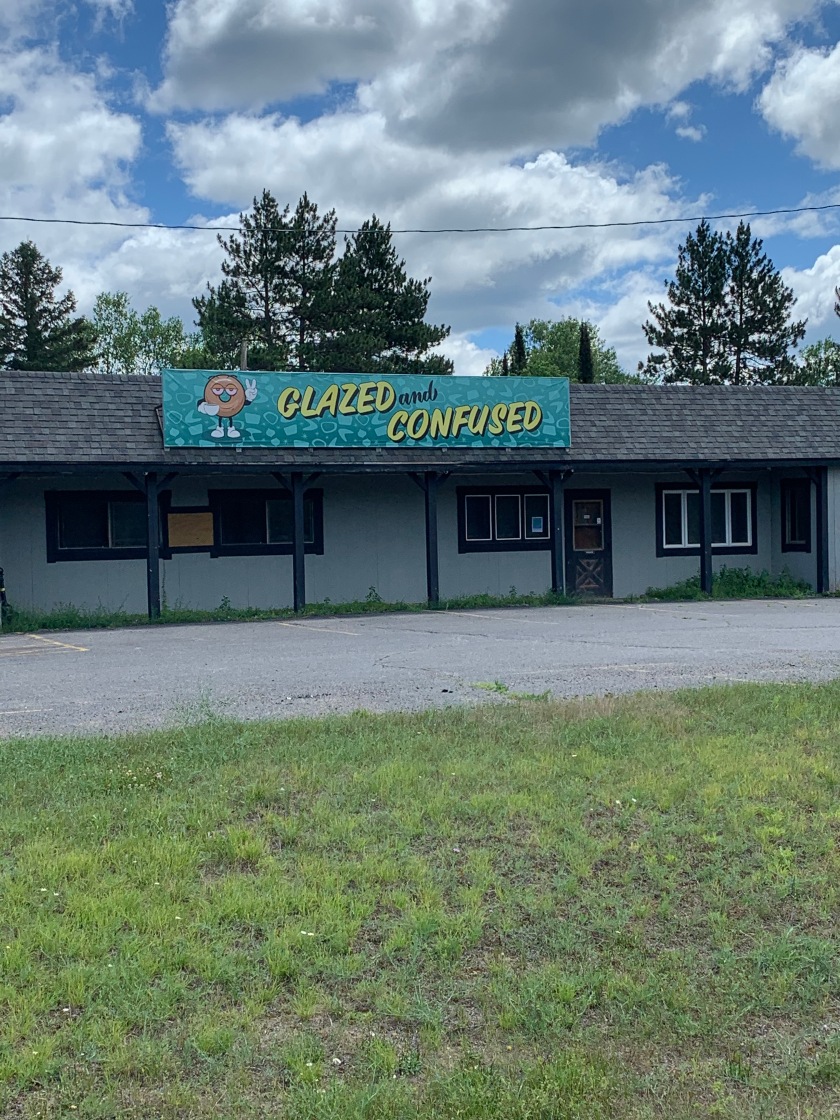 What A Great Name!  Alas, I Think It Closed Down Due to Covid-19

Alpha Brewing.  A Startup Open Throughout Covid-19.  We Just Stopped To Eat a Sandwich…No Beer Today.

Our Campsite View at Camping In The Clouds